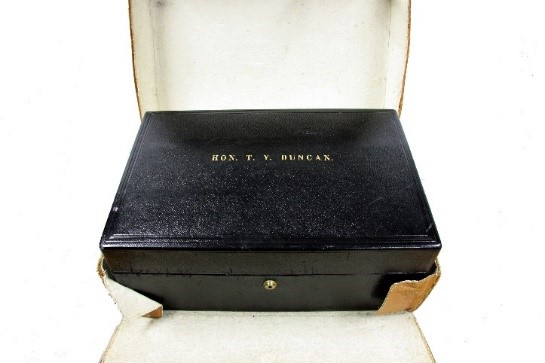 Contents to be revealed in historic MP briefcase

The North Otago Museum has accepted into its collection a leather document box belonging to Thomas Young Duncan known as TY Duncan.

Duncan was born in County Tyrone in Ireland in 1836 and arrived in New Zealand from Australia in 1862 to join the gold rush to Central Otago. Duncan purchased 105 acres of land at Pukeuri in 1864 and resided there until his death. TY Duncan road, just south of Pukeuri is named after him.

Director of the Museum, Gallery and Archive Jane Macknight says, “Duncan was an important public figure for the Waitaki District. He was Member of Parliament for Waitaki from 1881-1890 (succeeded by John McKenzie of Palmerston) and Member of Parliament for Oamaru from 1890-1911. Duncan was also Minister of Lands & Agriculture from 1900-1906. He was appointed a member of the legislative Council of NZ from 1912 until his death in 1914”.

The honourable Jacqui Dean, MP for Waitaki will be at the museum for the grand opening.

“I am honoured to be invited to this special event. Although we lived centuries apart, Mr TY Duncan and I shared the special job of representing the Waitaki region as local Members of Parliament. While it’s the same role, the change in times means more reliance is placed on different tools to get the job done. I believe this box is so evocative of these changing times, once a locked briefcase being the safest way to carry important parliamentary documents, now most of my work is safely stored on a pen drive or some other electronic device. I am so intrigued as to what we will find inside.”

The document box would have been used by Duncan for storing his official parliamentary papers and is currently locked. Museum staff will open the document box on Monday 10 July at 9.30 to find out what is inside.

The opening of the TY Duncan MP Briefcase will take place at the North Otago Museum, 9.30am Monday 10 July.